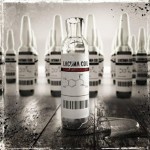 As previously reported, Lacuna Coil have commenced the recording of their new album and, starting this week, will be answering fan-submitted questions exclusively on Emptyspiral!

Here are the first answers to your questions..

How many songs are written yet ?

ANDREA: All of the songs for the album have been written and weÕre now working on the lyrics. Obviously in the studio some things are gonna change a little bit, but weÕve been quite severe with ourselves and weÕve been throwing lots of stuff in the bin, even before it makes it to a demo.

CRISTINA: We definitely write constantly!ÊWhether it’s a whole song idea, or a riff, or a vocal melody, we collect everything we create, and this time it’s a LOT of stuff!ÊNot all of the material is going to be used for album, or for bonus tracks though… but we still have it all and we keep it. There’s always something interesting to go back to and re-listen to again!

Have you thought about doing a super fan packaging, like super classy and super expensive ?

CRISTINA: ‘It’s definitely in the air. In the download era I’m still convinced that the material copy of an album is still something cool to have in your hands. Even more so if it’s protected by beautiful box enriched with a stunning graphic, visual and artistic ideas, plus gadgets. I personally have TONS of ideas… but with these ideas the cost of the final product might end up being waaaay too high!’

Keep an eye on Emptyspiral for the next set of answers!