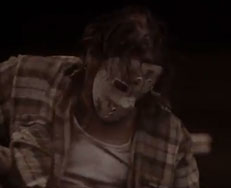 ‘Carnage Euphoria’, The third video teaser for Lacuna Coils forthcoming album ‘Dark Adrenaline’ has been released today. In the video we see Maus as ‘Leatherface’ from the Texas Chainsaw Massacre, running after one of his victims..