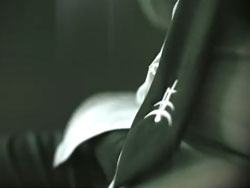 ‘The Sane Madness’, the sixth (and final?) video teaser for Lacuna Coils forthcoming album ‘Dark Adrenaline’ has been released today. In the video we see drummer CriZ appear to have some kind of schizophrenic episode; switching relaxing in an office to violently preparing for revenge..