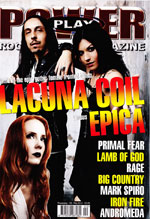 Lacuna Coil graces the cover of the February 2012 issue of UK Rock and Metal magazine Powerplay, as well as an interview with the band. Held on the day in 2011 when Lacuna Coil’s tour bus was hit by a lorry in Colchester, UK (don’t worry, no one was hurt!) Andrea and Cristina talk about the differences between Dark Adrenaline and its predecessor Shallow Life, how the heavier and darker sound came out in the song writing process, the continued collaboration with producer Don Gillmore, and more.

Power Play is available on the new stands now.