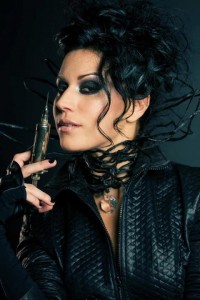 In the article Cristina talks about how various albums over the years have influenced her and reveals that the first album she bought was ‘Billie Jean’ by Michael Jackson, she owns ‘Born This Way’ by Lady Gaga (but prefers the previous album), the ‘album that should not be’ is ‘Lulu’ by Metallica/Lulu, she wants ‘Innuendo’ by Queen played at her funeral, and more..

When asked what album she wants to be remembered for, Cristina has this to say “Comalies.  I’m really grateful to that album because it makde us become more popular as a band. There’s not a recipe for success, so you can have the best album in the world and not make the big jump to become a popular band, or an unknown and respected band.”

You can read the whole article in Metal Hammer No. 237, available now.

By Matt Nov 12, 2022
Andrea and Cristina Interviewed by KNAC.COM

Andrea and Cristina Interviewed by KNAC.COM