Cristina on Tarja Turunen’s In The Raw album 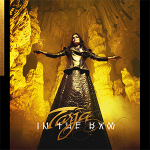 Finnish singer Tarja Turunen has announced that her forthcoming coming album ‘In The Raw’ will include guest vocals from Lacuna Coil’s Cristina Scabbia.

The full tracklist for the album is:

‘In The Raw’ will be released in multiple formats on 30th August 2019 and you can pre-order at www.tarja-intheraw.com