At Home With Lacuna Coil 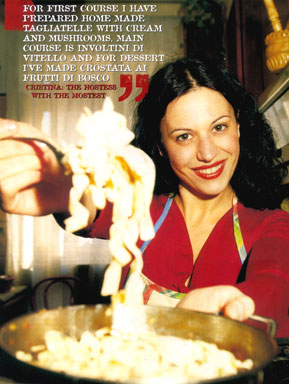 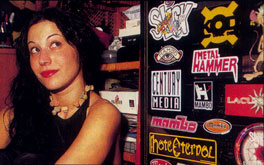 “Hey Guys! I have been told you are coming over to see me! Get ready ‘cos my house is a mess. Well, at least my room is…it look’s like a market, it’s mayhem in here!”
Lacuna Coil’s Cristina Scabbia email Hammer to warn us about the state of her a couple of weeks before we’re supposed to meet up for this feature, even attaching a picture of her room as proof. She might be right; when we actually get there, it’s a pleasure to see that everything has been left the way it was on the photograph. Cristina is obviously not afraid to unveil her more ‘comfortable’ side. There are so many different items of all colours and shapes amassed in her bedroom that not even dust couldn’t elbow its way in here. 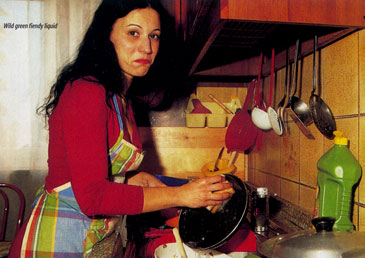 “What she we do first?” asks Cristina. As we don’t have time to book a removal company or a fumigation expert, whilst in Rome, let’s do as the Romans do. Only we’re in Quarto Oggiaro, an industrial area north of poncey fashion capital Milan. Outside, the weather’s fairly temperate, the sun is shining and the roadworks paint a dusty picture of this side of town. Cristina decides to go for the throat as it’s lunchtime and we are shown into an elegantly furnished dining room, adorned with old-fashioned, stylish fixtures. On a wall, there are several pictures of the Lacuna Coil’s frontwoman taken from various promotional photo shoots. There’s also a montage of her face next to heart-throb footballer Maldini – something that she was sent by his football club as a gift. You just can’t go to Italy and expect not to be exposed to soccer in one way or another. Nobody is (apparently) allowed to enter Cristina’s house unless they support AC Milan. We should get our coats then.
“That’s not strictly true,” the Lacuna Coil’s vocalist clarifies. “That’s one of my dad’s jokes. He is the real hardcore AC Milan fanatic but yes, now that I think of it, all of our friend’s, including the guys in the band, are AC Milan supporters.

“I love it,” she beams. “I have the official club shirt and lots of merchandise and recently I have even been given my favourite player, Gennaro Gattuso’s original shirt!” Apart from football, the other subject that is dear to any Italian is food. So after spending most of the morning over the stove, Cristina is eager to serve lunch.
“Today, for first course I have prepared home made tagliatelle with cream and mushrooms,” she enthuses, “Main course is involtini di vitello (veal wrap arounds) and for dessert I’ve made crostata ai frutti di bosco (berry pastry) because the record company told me that today is (Hammer photographer) Carole’s birthday.”
It goes without saying that lunch is downright delicious. Cristina’s cooking is an extra arrow to her already overspilling bow but as always, the real surprise is in the pudding. The Crostata dessert turns up with lit candles, with the birthday girl’s name on it, but a dubious sculpture next to it. 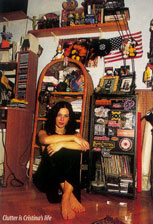 “It’s supposed to be a camera,” Cristina bursts out laughing. “But it looks crap, doesn’t it?” Well, it’s the thought that counts. Thing is, the Italians are renowned for their immediate and warm dispositions. Though nearly everything to them is a bit like a life-long pursuit of pleasure, far from being a bunch of rudderless buffoons, Italians are spontaneous, friendly, even homely people. You could, therefore, hazard the guess that in this sense, Cristina is the ultimate modern-day stereotype of an Italian woman.
“I love cooking so much that if it were up to me I would just spend all day at it,” she admits. “Maybe I should open a restaurant. Cooking to me is art and art is a communication tool. So, if you can’t communicate the way you are, you are a bit of a loser. I absolutely adore experimenting with pasta dishes, home made pasta especially. From orecchiette, tortellini and tagliatelli, every pasta shape is of interest to me and I also love trying out different sauces. I am too keen on meat dishes though. When I am home on my own I never think to myself, ‘Ok, I’m going to make myself a roast.’ 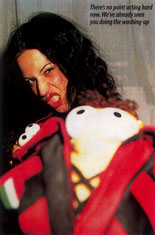 “I’m also very good at making desserts,” she continues. “Strudel, pan di spagna and even tiramisu, though Marco (Coti Zelati, Lacuna Coil bassist) is a lot better at making tiramisu. He’s also a very keen cook. There’s a TV show over here call La Prova Del Cuoco where two contestants are given a budget of 10 Euros to buy ingredients and they are only given half an hour to make a meal. Then, this jury has to taste it and one of the wins some prize in the end.” Difficult to imagine how anyone could get excited about watching what obviously sounds like the Italian version of Ready, Steady, Cook, though Cristina is too fired up about it to even draw breath in between sentences.
“And you know what?” They don’t usually propose unrealistic recipes! These are all meals that you can make in a few minutes. It’s brilliant ‘cos it provides so many suggestions! You know, Marco is also crazy about that show. He usually goes to sleep really late every night, sometimes even 5-6am ‘cos he usually composes at night but he always sets his alarm clock at midday ‘cos even he can’t bear to miss that programme!”
Marco is Cristina’s boyfriend of the past eight years. They do say that is a relationship is to work out, the two parties have to have some common ground and it’s clear that Cristina and Marco are not only united in their passion for music (he is LC’s bassist after all) but their love of food, too.
“Yes, but don’t put us in the same kitchen together ‘cos we’ll probably kill each other,” she reveals. “If one of us is cooking, the other has to leave the room, especially if Marco is in charge ‘cos I personally don’t mind people hovering around, asking me questions while I am cooking. But he is utterly unbearable. If he is cooking, nobody can talk to him or even walk behind him! If they do, he becomes a bit ratty. He is an excellent cooking though, so I don’t mind clearing off whilst he’s in there.” 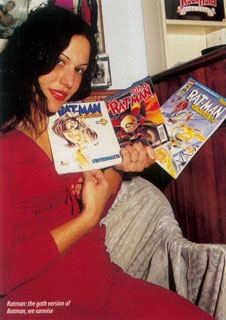 Let’s not get the wrong idea here. Cristina and Marco many have been a couple for the best part of a decade but they don’t live together. In fact, for lunch, we’re joined by Francesca and Dario Scabbia, Cristina’s parents. That’s right, the Lacuna Coil’s 29-year-old mirror-licking, rubber-wearing frontwoman still lives with her mum and dad.
“Yeah, I still live with my parents,” she sighs, “But I am here very little. Out of 24, I probably spend a total of five hours here ‘cos I am usually either rehearsing or I am at Marco’s or we are out and about doing stuff. This is where I felt most at ease, where I was born. And anyway, I am in my room most of the time. There, I compose and do all my artistic work. I am comfortable here ‘cos deep down I still feel like a little girl and I like that child-like aspect of myself. I believe that people should never lose touch with that side of themselves either. I can’t stand people my age who’ve already mapped out their entire live and leave absolutely no room for spontaneity.”
The majority of Italian kids don’t fly the nest until their wedding day so ‘still living at home’ is nothing out of the ordinary over there. And being the youngest of the Scabbia children, she probably gets a fair amount of attention from her family. Could we, therefore, assume that she is a bit of a spoiled little brat?

“I’m the kind of person that has a million projects and never sees the end of any of them,” she admits. “Now, for example, I have started using Playdo to make little cows but I don’t know when I am going to colour them in. I bought a sewing machine

‘cos at one point I got it in my head that I had to create bottle covers made of fabric. But yes, there is plenty of time for a spot of routine too. On a typical day I would usually get up around midday, have something to eat, watch TV and then go to Marco’s house. There we would either watch a film or compose a song. Sometimes I pop into the Rock TV studios which is a channel manned by musicians only. There, I either record links for shows, or do interviews with other rock bands. Then Marco and I would meet up with friends or rehearse in the afternoon and in the evening we might either stay home and watch a movie or we might go and hang out at our friends.
“But don’t get me wrong; I love being my myself, too. Especially ‘cos I tend to make a lot of my time for my artistic work, where I make my own little items using clay or any other kind of material. And I paint them as well. I am kind of split into two different people really – on one hand I love socialising and on the other I am very reserved, totally able to detach myself from society. And when I retreat into my own world I don’t see it as something negative. I see it as a day dedicated to myself.”