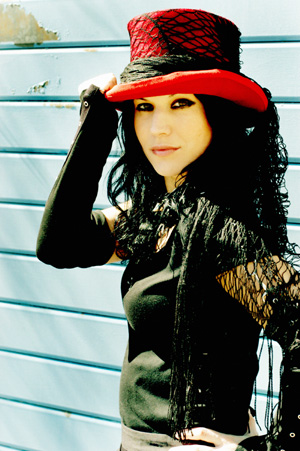 A metal band with female vocals has a track included in a Hollywood movie, tours extensively through the US and starts to get media attention. If you thought about Evanescence, you were wrong, we’re talking about Lacuna Coil, that, judging by the sudden success of Amy Lee’s band, and by the gradual growth of Nightwish, has everything to be next in line.
But the Italian band didn’t show up from one moment to the other. Lacuna Coil exists for almost 10 years, and made history in the strong European Heavy Metal scene by following the “gothic line”, with female and male vocals side by side, which became a tendency over there. Formed by Cristina Scabbia and Andrea Ferro(vocals), Cristiano Migliore and Marco Biazzi (guitars), Marco Coti Zelati(bass) and Cristiano Mozzati(drums), the band has three albums (“In a Reverie”, 99, “Unleashed Memories”, 2001, and “Comalies”, 2002) and is preparing the next one for the beginning of 2005.
The thing is that, recently, Lacuna has toured a lot in the United States, also as part of Ozzfest’s cast, what has caught the media’s attention, that urges for a new big commercial success, after Evanescence. To know what the band thinks about that, we captured the beautiful Cristina Scabbia in Springfield, right in the middle of the American tour, that kindly gave us this virtual interview.

Dynamite: How has the United States tour been? Is it getting better since the last time you played there?

Cristina: The tour is going very well. And, of course, gets better everyday. We are constantly playing in the US, finally we are spreading the Lacuna Coil world. There I a buzz around our name here.

Dynamite: Has it been good in Ozzfest, even in the second stage?
Cristina: Honestly I think the second stage is more fun, because the people can feel free to jump, mosh and move. On the main stage you ply in front of an audience that’s sitting down, which gives you a weird feeling.

Dynamite: The song “Swamped’ was recently included in the “Resident Evil: Apocalypse” soundtrack. How were you invited and why didn’t you compose a new song for the soundtrack?
Cristina: They asked us if they could use our song. We didn’t compose a song especially for that. They liked “Swamped” and decided to include it.

Dynamite: Do you know when you will release a new album? What can you tell us about it?
Cristina: The new record will be out next year. As soon as Ozzfest is over, we’ll go back home and start working on it. I can’t tell you much about what we are going to do, because, usually, we change everything a lot until the day we enter the studio. But I can assure you that it won’t be a techno album and that the distorted guitars and the heavy base will be absolutely powerful.

Dynamite: After Evanescence worldwide success, other band from the genre, like Nightwish, are growing. Do you think Lacuna Coil can be next?
Cristina: We don’t freak out about that, what we want it to be satisfied with our work. We work for us, first of all. Evanescence probably opened up a few doors for us in the US, but in Europe, everyone know who we are. But we are focusing in more important things. We want to be 100% focused on the music.

Dynamite: in the past it wasn’t usual for women to sing in metal bands, but it is now. When did this start to happen?
Cristina: I never thought of it as a weird thing. In Europe the fact of having women sing in band is very common. I see it as a very normal thing.

Dynamite: What bands with female vocals do you like? Is there any competition, in the good way, between the vocalists?
Cristina: There is no competition at all, especially between singers that have different voices and that can’t be compared at all. I don’t have a favorite singer, but I love the black music singers, because of the felling they put in the music,

Dynamite: Is there any special meaning to the name “Lacuna Coil”?
Cristina: It means something like “empty spiral”, translating poorly, because the name is a mix between a word in Italian and another one in English.