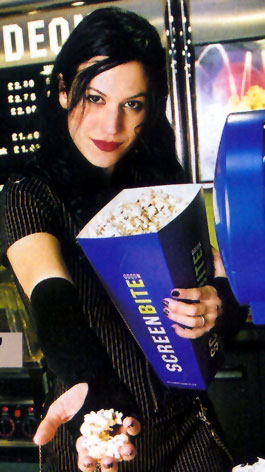 Seen any good ones lately?
There’s an unknown from a young American director called ‘Attack Of The Cock-Faced Killer’. There’s this killer and he’s got this mask with a big cock on it. It Sucks! But it’s beautiful because it sucks so badly.

Do they ever make you sick?
Not really. The only thing that sickens me is when people are unkind to animals.

If you were an animal what would you be?
People always say a dog or a cat. Me? I’m a unicorn.

Um…
Okay, I’m a cat, because I’m independent but I’m also really romantic, and I take care of other people.

Who would play you in a movie about you?
I’ve never really thought about it. Even if I’m not that beautiful, I’d love to see Angelina Jolie doing it.

Do you have any guilty cinematic pleasures?
Probably, but I don’t regret anything.

Do you fall for screen heart-throbs?
Rarely, but I’m not blind. Orlando Bloom is really sexy in ‘Lord of the Rings’

What about Orcs?
I love the Orcs, but no. They’re so brutal and stupid. And their piercings! Very Metal.

Are there any genres you won’t watch?
I seriously dislike plastic Disney movies. But ‘Finding Nemo’ was brilliant because it wasn’t just for children. It was really intelligent. I love it when they aim the humour at adults, too.

Have you ever been to an adult theatre?
No need. I’m in a band with five guys so they bring it all with us. Stacks of DVDs, ‘Hustler’ mags. On the last tour in the States we had the ‘Playboy Channel.’

Does that make you uncomfortable?
I’m not a hypocrite, so I’m not all against it. People make out like there’s something wrong with it, but it’s a big lie.

You’ll burn in hell.
We’re all human beings, and all human beings like sex. The same people who say they hate are the same ones going home and spending all night getting off on it. It’s not like I’m out buying loads of DVDs, but I’ve got no problem with it.

Any other bodily functions you’d like to see in film?
I don’t need to see people going to the bathroom. You can be pretty sure that’ll be superficial to the plot. Sometimes you see the actors naked because it gives sense to the story. No-one needs to see Nicole Kidman having a shit.