Queen of the Damned / Interview with Cristina Scabbia 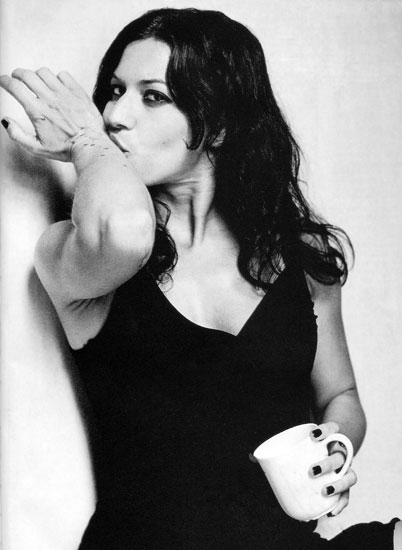 Name five Italian bands who’ve made it in metal. Still guessing? Then you might begin to understand just how significant Lacuna Coil’s recent success is. Aside from a rapturously-received slot on Ozzfest last year, the Milanese sextet have sold over 200,000 copies of 2003’s ‘Comalies’ – making it one of metal label Century Media’s biggest releases to date. “We’re just trying to stay sane,” laughs frontwoman Cristina Scabbia. “It’s been mental.”

You’re that busy?
“Oh yeah. Between Download and a load of other summer festivals it’s been incredibly busy, especially with the new album to work on.”

Expectations must be high after Comalies?
“Well obviously we want to do well but we haven’t been put under a lot of pressure, because no one ever imagined we’d get such a big reaction. It was incredible when I heard we’d sold 100,000 copies, and when I heard we’d passed 200,000 it was like, ‘Uh, wow’.”

Were you surprised much of that happened in America during Ozzfest?
“I wouldn’t say so because America seems more open-minded than Europe. We’d be playing headlining gigs and you didn’t just see gothic-looking kids. You had all types of people who just wanted to see a good show.”

And they’re not here?
Of course they are! But there’s less press than in the UK or Europe, so when we went out with Anthrax and then POD and then Ozzfest we started getting this huge buzz all at once. It’s good – I think that experience has brought us a lot of new influences to bring to the new album.”

So it won’t be ‘Comalies II’…
No way. That’s like three years old now. It’s not like we’ve written a techno album or something commercial, though. And we still have a lot of work to do.”

Are you handling the lyrics?
“We all put something in and we like to write songs like diaries. We’re not philosophers – buy a book if you want to read something really spiritual or life-changing.”

You’ve come a long way from when you were called ‘Ethereal’
“Pardon? Okay yeah, but other bands had that name too so right when we signed our first contract we had to change it.”

What happened next?
“We signed a deal in ‘97’ and our first proper release came in ’98. But the basis of the band was already there. Me, Marco (Coti Zelati, bass) and Andrea Ferro (vocals) were together since ’96. We’re a very relaxed band because we had all our drama at the beginning.”

Your line-up changed?
“Yeah. We’d just signed the deal and were about to go on our first major tour when half of our band decided to quit, so we hired some guys to back us up.”

Andrea also sings – does he mind you getting the attention?
“We know very well that having a female in the band is going to be the main focus for a lot of people. It’s because I’m a singer and because I’m a girl. What I don’t is that when people have issues with that. If a band with a male singer and just the guy goes on the cover no one thinks twice. I’m doing my job, and the guys know it. It’s just presentation and image.

Do you get annoyed at the double standard?
“Not now, because now I know how it works. When I started there were a lot of people who thought the reason I was in the band was because I looked nice – but they shut up once they heard me. That’s what matters.”

You don’t seem to mind the camera?
“I wear just what I like. You don’t go on a first date dressed the same way you go to the supermarket. It’s not like I’m always in high heels, and if you do good music, having an image isn’t going to get in the way. It’s part of the art.”

Is being image-conscious a bit of your Italian culture coming through?
“Of course, when we go onstage we’re thinking about the iconography. I can’t understand bands who think all they need to have is good songs. We don’t mind looking good, and yes – being Italian, we bring our passion to that. Coming from a fashion capital probably helps but it’s not like we’re in Versace or Prada or Gucci.”

But isn’t the gothic look becoming a bit mainstream?
“Of course it’s trendy right now, bit for us it’s just a way of playing with your image. I like black lace and chains, but I like simple dresses and high heels too.”

Are you wary of being lumped in with bands with other ‘Goth’ acts, like HIM or My Chemical Romance?
“Well I know Villie Valo personally, but I’m not aware of My Chemical Romance at all really. You’ll always have followers for different reasons, but at the end of the day who cares? You can’t control that.”

But you are frequently compared with Evanescence..
“Yeah, but I really don’t care at all.”

Do you see them as an obstacle to getting the recognition you deserve?
“People have to be free to live their own lives. People see Lacuna Coil in magazines even now, but Evanescence all of a sudden aren’t there. That’s because we have a strong fan-base. They’re going to find it very difficult after getting that big all at once. We know how it works because we’ve been doing this for a long time. We’ve been around.”