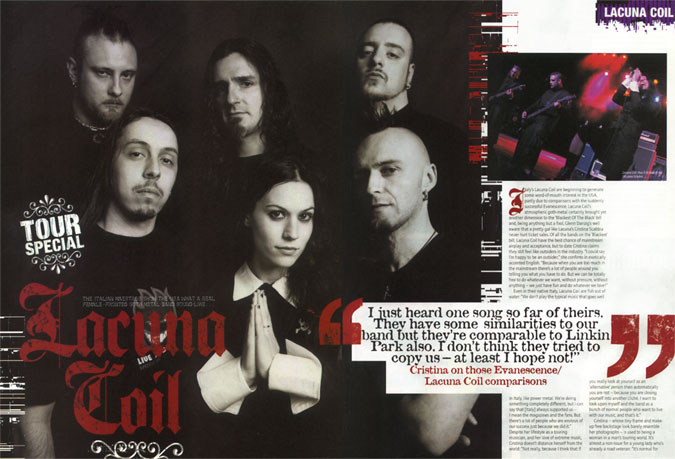 Italy’s Lacuna Coil are beginning to generate some word-of-mouth interest in the USA, partly due to comparisons with the suddenly successful Evanescence. Lacuna Coil’s atmospheric goth-metal certainly brought yet another dimension to the ‘Blackest Of The Black’ bill and, being anything but a fool, Glenn Danzig’s well aware that a pretty gal like Lacuna’s Cristina Scabbia never hurt ticket sales. Of all the bands on the ‘Blackest’ bill, Lacuna Coil have the best chance of mainstream airplay and acceptance, but to date Cristina claims they still feel like outsiders in the industry. ‘I could say I’m happy to be an outsider,” she confirms in exotically accented English. “Because when you are too much in the mainstream there’s a lot of people around you telling you what you have to do. But we can be totally free to do whatever we want, without pressure, without anything – we just have fun and do whatever we love!”
Even in their native Italy, Lacuna Coil are fish out of water: “We don’t play the typical music that goes well in Italy, like power metal. We’re doing something completely different, but I can say that [Italy] always supported us – I mean the magazines and the fans. But there’s a lot of people who are envious of our success just because we did it.” Despite her lifestyle as a touring musician, and her love of extreme music, Cristina doesn’t distance herself from the world: “Not really, because I think that ifyou really look at yourself as an ‘alternative’ person then automatically, you are not – because you are closing yourself into another cliche. I want to look upon myself and the band as a bunch of normal people who want to live with our music, and that’s it.”

Cristina – whose tiny frame and make-up free backstage look barely resemble her photographs – is used to being a woman in a man’s touring world. Its almost a non-issue for a young lady who’s already a road veteran: “Its normal for me. I’m in a band with five guys and always the roadies, the crew are all men. I really manage very cool with men, probably more than with females; I feel myself a little bit masculine in the sense that I don’t have problems with people, I don’t have problems if I can’t take a shower every day or if the food is not exactly as I want.” Even the ‘Blackest’ shows, chock-full of macho-metal as they are, don’t phase Cristina: “I met Danzig – who could be an example of a ‘macho man’ – and hes really cool, really nice, really gentle. At least in front of me everybody has been gentle – I don’t know what they say behind my back, but it doesn’t matter!”

And what about those comparisons with Evanescence, the Arkansas band who’ve suddenly gatecrashed the US/UK charts with a sound some would say is alarmingly similar to Lacuna Coil’s? “I dunno what to say, because I’ve only heard one song of theirs so far – the Daredevil one – and, well, they have some atmospheric similarities to our band but theyre more comparable to Linkin Park I think. They probably don’t even know us at all. But you can’t help being influenced by other bands: music is an evolution. I don’t think they tried to copy us – at least I hope not!”

The above article appeared in the August 2003 (Issue 116) of Metal Hammer magazine.