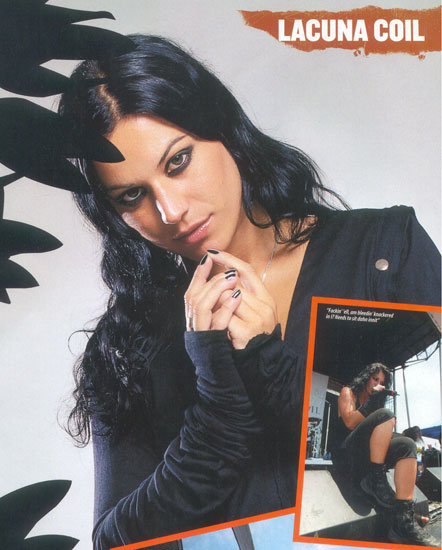 It’s a sunny afternoon in the middle of September and it’s just our luck that Hammer is locked away in a disused warehouse in north London. But we can’t really complain we’re in very good company. Cradle of Filth mainman Dani Filth, Nightwish vocalist Tarja Turunen and Lacuna Coil frontwoman Cristina Scabbia have just finished posing for this month’s cover. Dani is prancing around the room like an evil little pixie entertaining us with his amusing anecdotes and berating Cristina for – allegedly – necking his wine.
“Dani I only had sip,” she giggles trying but failing miserably to shoot him a stern look. “You drank the rest of the bottle and you’ve forgotten already!”
“I don’t know, you really can’t leave anything lyiung around here can you?” tuts Dani, slying one of Hammer snaper Johny Mac’s cigarettes in the palm of his hand. Dani stomps off to the bathroom in a faux huff while Cristina reclines on one of the large black leather sofas in the corner of the room. Blue-grey plumes of smoke dance around her face as she takes another long, hard pull on her cigar. She picks up a women’s magazine and thumbs through its page until she arrives at the horoscopes page.
“I never really pay attention to what my horoscope says,” she tells Hammer with a warm smile. “But, I’m going to have a look anyway.”
She drags her index finger down the page until she finds her star sign.
“Gemini,” she announce. “Let’s see what the stars have in store for me: ‘The last few months have been pretty traumatic for you. There have been a lot of dramatic changes in your life. But here is a promise. It’s safe to relax. Honestly it is. All that truly needs to happen, has happened.
“That is just so true,” she gasps in astonishment as she passes Hammer the magazine. While we don’t really instil a great amount of faith in horoscopes as ours says. ‘You’re going to have an uncomfortable experience when Mars comes into contact with Uranus’, in the case of Cristina and her band, theirs couldn’t be more apt.
Nigh on 18 months ago, the Italian sextet weren’t even known outside Europe and even then – bar their zealot supporters in the UK press and at the Brit arm of their label Century Media – Lacuna Coil weren’t even considered a real priority, not even by their label’s other international offices. But four months of constantly touring in the US where no-one had even heard of them, except for marketing people behind Evanescence of course, who we shall say borrowed heavily from Lacuna Coil’s image and sound, has finally paid off for the Italians. The group’s latest album, ‘Comalies’, has now shifted in excess of 150,000 units Stateside and it’s still going strong. As you’re all well aware, success breeds success. The first single to be culled from ‘Comalies’. ‘Heavens a Lie’, was the most played song on US alternative radio earlier this year.
“It’s weird to have sold so many copies of an album which is actually two years old,” explains Cristina. “The fact is the US just discovered it later than everyone else. Last year we started touring there with Type 0 Negative and Anthrax, when it just happened that we got a lot of attention from the radio stations with ‘Heavens A Lie’. Then we did the POD tour, followed by Ozzfest. We did everything step by step, it’s not like everything happened in an instant. We really had to work for it. The US was an amazing experience for us, I love touring there, and playing on Ozzfest was really good exposure for us. We met so many people and we learnt a lot, we really did. No I could never say it sucked because I had a great time! 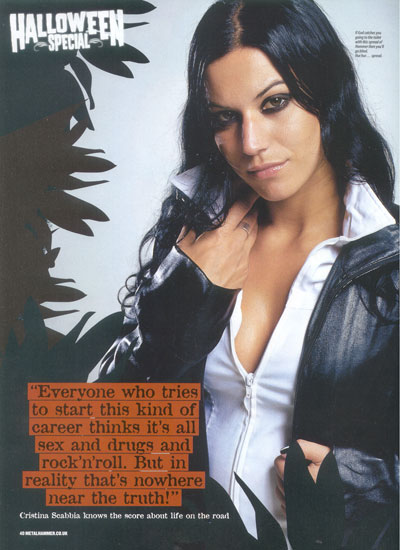 “At one point they asked me to become a member which really made me laugh,” she grins. “I told them that I might be a tomboy, but I have two brothers and there are five guys in my band, so I’m not naïve enough to fall for those kind of lines! I did however teach them all how to say ‘senza maglia’ which is ‘shirtless’ in Italian.”
Aside from her seeing her walking around backstage every day, her invitation to join the gang of bawdy boys came shortly after pictures of Cristina posing for a US men’s magazine were posted online. The SOC got hold of them and instantly heralded her as THE Ozzfest sex symbol.
“That was so funny,” she recalls. “Those shots came out really, really good. But y’know what? I just look at them and think, ‘Hey, that’s not me!’ I don’t wake up in the morning and look in the mirror and think, ‘Wow! I’m not’, but I do like feeling sexy. I think it’s a state of mind y’know? I don’t go out in high heels all the time, and even though I play in a heavy metal band I’m a woman. I don’t want to act like a man, I want to keep my femininity. And that’s really great. It goes to show that even if you’re not tall, and you haven’t got blonde hair and blue eyes and you’re not super perfect, that you can still be sexy.”
After a couple of months off, Lacuna Coil are set to hit the studio to record the follow-up to the highly acclaimed ‘Comalies’. And, judging by the waves this band are making right now, they’ve got the style and the substance to make it huge.