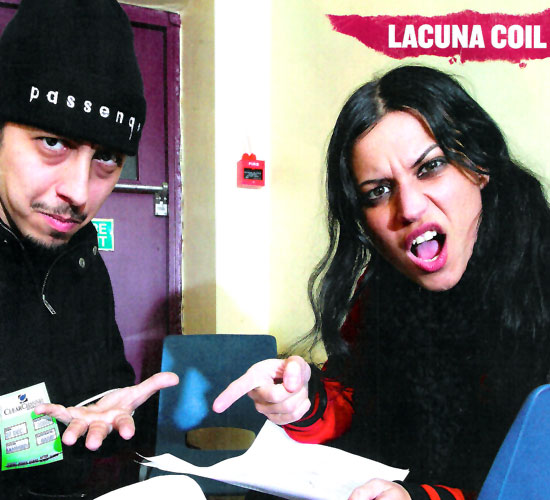 After years of playing small European venues, how did you feel playing those huge stadiums
in America?
Dove, via e-mail

Cristina: “It was great! It’s the dream of every band I guess. When we started this band back in 1997 we never though we’d get as far as we have, so it’s even more of a beautiful thing.”
Hammer: So now that you’re a HUGE band, what have you been able to command on your backstage rider?
Andrea: “Oh, that’s a tricky one. Sometimes the venues honour our rider and sometimes they cut it in half. We haven’t made any ridiculous demands… so far. But I have to say it’s always good to get Corona on the rider instead of that Miller stuff. To us it just tastes like piss.”

Cristina, is it annoying being compared to every other female fronted metal band on the planet?
Jak Cooper, Royston

Cristina: “Um, actually now it’s really cool because people compare them to me! I guess I’ve just learned that it’s all a big wheel. Today people compare other singers to me, tomorrow it’s going to be someone else.”
Hammer: So Evanescence, what do you really think ofthem?
Cristina: “The Evanescence thing is really funny actually. Okay, I’ve never met her, I only know the songs because they’re on TV and radio everywhere but we’ve just heard so much bullshit about what they’ve supposedly said about us. I really hope it’s not true.”
Andrea: “At the end of the day we don’t know them and even if I don’t like a band it’s not our style to talk shit.”
Hammer: But, if Cristina and Amy met and it came to fisticuffs, who do you think would win?
Andrea: “Oh Cristina definitely! She’s small, but she’s fiesty.”

Are there any plans on releasing a DVD at some point in the near future?
James Simpson, Stockton-on- Tees

Andrea: “There will be one for sure, but I don’t know exactly when though. I’d really like to do a big production live show, but now we’re just thinking about trying to get the new album finished.”
Cristina: “We’ve got so much stuff at home ready and waiting if we do though. I think we’ve got like 15 concert tapes at home as well as the music videos and lots and lots of backstage behind-the-scenes stuff.”

Where can I purchase that rather sexy billowing Chinese dress as worn by Cristina in the ‘Heaven’s A lie’ video?
Rhiannon, via e-mail

Cristina: “Actually I got it in Milan. I bought it from an exhibition of different cultures from around the world. It’s a classic Chinese dress so I think you can probably get one like it at any Chinese clothes store. I had to open it a little bit though’ cos it was so tight I couldn’t move around on stage!”

Why haven’t you come to Australia yet? We need metal too!
Daz, Australia

Cristina: “Well, just buy us the tickets Daz and we’ll be over there right away!”
Andrea: “Actually, for the next album we’re planning on trying to go to all the places where we haven’t played yet, so Daz, you never know!”

Cristina: Would you ever do a shoot for Playboy?
James, Pimlico

Cristina: “No! [laughs] I did a photo shoot for an American magazine called Stuff which is kind of like a men’s magazine, but the point is, as I always say, you can be much more sexy with your eyes. Of course you can show a little bit of skin, but I think it’s much more intriguing to leave a little to the imagination. So I think that a Playboy shoot would probably be a little too much.”
Hammer: What, even if they paid you a million dollars?
Cristina: “Hmm… a million dollars you say? I think I could consider it! Never say never!”
Andrea: “I would pose for Playboy for a million dollars.”
Cristina: “Well, if they put a Playboy Playmate on your lap for the photoshoot you’d probably pay them! Anyway, I’m sure Playgirl would have you, Andrea.”
Hammer: Did you hear about the issue of Playgirl with Pete 5teele from Type 0 Negative on the cover? Apparently it was their worst selling issue ever.
Cristina: “Really? That is a shame. Probably most people who read Playgirl would prefer David Hasselhoff. I would have bought the Pete issue though.”

I think Lacuna Coil are an awesome band and I was wondering what your band’s name means?
Natalie Coleman, Surrey

Cristina: “When we started we were called Ethereal, but as we quickly found out there were loads of bands using that name so we created Lacuna Coil instead. ‘lacuna’ is an Italian word which means emptiness and a ‘Coil’ is spiral. So our name is basically ’empty spiral’.”

Who would you most like to collaborate with?
Andrew Fish, via e-mail

Cristina: “There are so many bands we like, we’re really eclectic in what we listen to. We don’t just listen to metal or rock, even though they are the main things that have influenced this band. If we had to collaborate with anyone, it’d probably be with friends of ours from back home.”
Andrea: “Yeah, people like Britney Spears or maybe even Justin Timberlake. ..”
Cristina: “Or Nsync. I can dance you know!”

Cristina and Andrea, you are both amazing singers, what advice would you give to people who would like to improve their singing voices?
Natasha, Ireland

Cristina: “First of all I would say that even though technique is really important, heart is probably more important. So even if you’re not super technical there are ways you can still show a lot of emotion.”

Andrea: “I’d agree with that. When I decided I was going to be a singer I started growling along to death metal and hardcore, so having confidence is a big part of it. You’ve got to be comfortable with your voice and for me that is something I’m still getting used to.”
Cristina: “And secondly I’d recommend a special drink we use on tour which is a mixture of ginger root, lemon juice, honey and hot water.”

I saw you live in concert a few months back, and you were amazing! I was wondering, what songs do you most enjoy performing live?
Rodney Wilder, via e-mail

Andrea: “None of them! We’ve been playing these songs live for ages now so we’d really like to finish the new album and play some new ones.”

Dear the other guys, do you guys get sick of Cristina getting all the attention?
Dolph, Reading

Andrea: “I think that’s just the perception of the media. Obviously Cristina is the most photogenic person in the band so she does most of the photo shoots and honestly, none of us can compete! But in general we’re very happy about the attention we get. When we meet fans they want everybody’s autograph and they want their photo taken with all of us…”
Cristina: “The level of attention I get is really different. When we meet the fans, they’re very nice to me. They’re very polite and ask me to marry them or they want to kiss my hand, but when they meet the rest of the band the fans are more. . .”
Andrea: “Explicit?”
Cristina: “I was going to say direct!”

How far along the line is your new album and how does it compare with previous efforts?
Nowtface, Nottinghamshire.

Cristina: “I think it’s too early to say. Obviously it’s going to be an evolution of where we were at with ‘Comalies’ but don’t worry, it isn’t going to be a techno album by any means.”
Hammer: Damn!
Cristina: “Well actually I was lying. The new lacuna Coil album is going to be a hip-hop record!”
Andrea: “Some of the stuff we’ve recorded is much heavier than anything we’ve ever done in the past. And, at the same time, the vocals are much more melodic. Even I’m singing some clean vocal parts! But hey, we’ve only finished two songs so far so it is a little too early to tell.”

Honestly, do you think you would have attained the same success if your singer was a monster?
The Eye Of Horus, Smugsville

Andrea: “I think we’d have been a very different kind of band. If it was just us, we’d play a lot more heavier stuff.”

Cristina: “I personally think that if there is quality, it will always shine though. But, without the presence of a girl in
the band, there would be a lack of attention to begin with and it would take much, much longer to get noticed. But, even if you are in a female-fronted heavy metal band, you’ve got to be good or your career is going to be gone pretty quickly like a puff of smoke. So, for this band, it helped us in the beginning, but even without my image, or if I was really, really ugly, I think we’d still have succeeded.”
Hammer: But what about the monster angle? Do you think you’d be where you are today if Cristina was really a freakish looking monster?
Cristina: “For sure! A really monstrous monster. Sometimes monsters are the most beautiful people, umm, creatures on earth. Not that I’m here gunning for ugly guys, mind you!”
Hammer: Attention groupies: Good looking guys only to Miss Scabbia’s trailer please!

Cristina what are you doing Friday night? Fancy going out for a drink and maybe dinner too?
Mofo, Southend

Cristina: “What’s for dinner? Sorry Mofo, I’m Italian, I like to co0k so I need to know what’s on the menu first.”
Hammer: Speaking of Italian food…

What country outside of Italy makes the best Italian food?
Katherine, Clapham

Andrea: “The United States probably. We went out for dinner in Brooklyn with Pete Steele to an Italian restaurant. That was probably the best Italian food we had outside of Italy. It was very nice, but not perfect.”
Cristina: “And I don’t know why. They have all the ingredients to hand and there are lots and lots of Italian Americans in Brooklyn. Maybe they lost the know-how on the boat over there?”
Hammer: Do you always look to eat Italian food when you’re touring outside of Italy?
Cristina: “No, not usually. And especially not pizza!”

What is the best Italian swear word and what does it mean?
Jimmy Zoso, Camden

Andrea: “Ah, there are so many! We swear a lot.”
Cristina: “Um, how about vaffanculo?”
Hammer: And what does that mean?
Cristina: “It means ‘fuck off’ in Italian.” 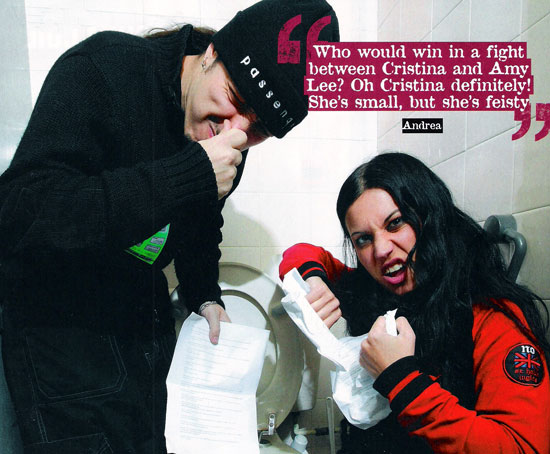