Taking on the USA / LACUNA COIL 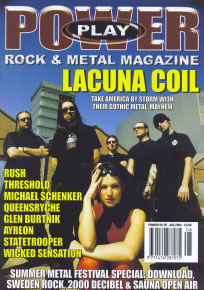 Italians Lacuna Coil are having a great year. For the first time ever, a band from Italy is playing on Ozzfest, the band has been gaining fans in droves in the States, and co-lead singer Cristina Scabbia was voted Sexiest Rock Chick in Powerplay. What more could a band want?
Well, the answer for Lacuna Coil is a lot. Scabbia and Andrea Ferro sat down with Powerplay’s Jason Perlman on their bus before their gig with P.O.D. and Blindside in Cincinnati, Ohio and talked about all that is happening to them in a roller coaster of a year. Scabbia looked as if she just woke up a few minutes ago, but still proved why she received the No 1 vote and Ferro was like a little kid in a candy store, as his excitement to talk about the band was as genuine as a Tetley’s on a warm day.

Obviously honoured by being voted sexiest rock female, Scabbia was also quick to point out that she is not just about image and looks.

“We’re actually not focusing everything on the image of girls and being sexy. But I mean that’s what I am. It happens that we have a female singer, but that’s pretty normal. I don’t see the point that if I’m a female in a rock band or metal band I should act like the guys. I am not one of the guys. I seem pretty normal in what I do, because I am just being me. But of course, I’m honoured to be voted as sexiest, but I am just being me. It’s not an act.”

Sometimes, as maybe seen with bands such as No Doubt or Evanescence, the part of the sexy singer can overtake the work of the rest of the band, but Ferro sees what is happening around Cristina’s image as positive for the whole band.

“For the band, I think at the end of the day it’s just as positive for the band as it is for Cristina. But the band, including Cristina, are in this much more for the music than for the image. As for the band, it’s always been about the music we play. The image of Cristina is an extension of the band, and there may be a lot of people who maybe listen to the music because of the image, and that is okay because they listen to the music and say, ‘Okay, Lacuna Coil is a good band.’ Fans are never going to buy records just because there’s a nice woman on the cover. You have to have the talent as well.”

Lacuna Coil seems to have that talent, and for well over a year, the band has been in the United States trying to use that talent to break through the commercialism of the big corporate music industry. As shown by the Powerplay Poll, readers of Powerplay along with millions of State-siders, are looking at Evanescence as the new goth accessible band. With Amy Lee’s harmonic vocals and rough licks, Evanescence has been a mainstay on the charts worldwide, while Lacuna Coil, who has been inventing that sound, remains underground.

“We are not under a huge label that can spend millions of dollars for promotions. We don’t have the chance to be on soundtracks for movies and there are a lot of things we definitely don’t have because we’re coming from the underground. And we’re proud about this because we got the experience on stage and we know how to live on the road. I mean, we’re growing step by step,” says Scabbia of where they are compared to Evanescence. “We didn’t explode in a minute so we couldn’t manage everything about this kind of life. The only thing that’s really frustrating is that a lot of people are pretty ignorant in music. They just see what the media is offering and they don’t look behind that. They don’t look at all the bands separate. I mean, it’s not a competition, but they should look further than the things they see on the TV, because there’s so much more to discover. Fans should discover even the old bands, to see where the bands are coming from.”

“But this is not a competition, either. They are doing their thing and we are doing ours. I think it’s great people are listening to this kind of music, and that is really what it is all about. If someone listens to Evanescence and then goes and buys a Lacuna Coil record, that is fine,” says Ferro.

Unlike many female-fronted bands, especially bands with two singers, Lacuna Coil is always pushing the envelope with their music and vocals. While most would be satisfied with the male being the aggressor and the female the symphony behind him, Lacuna Coil switches up their vocals much like any other instrument in the band.

“We use our voices like instruments, not like the beauty and the beast. A lot of the fans like the female vocals to be softer than the man’s. We both try to do something aggressive and clear at the same time without caring whether, it is a female voice or a male voice. Just what sounds right,” says Scabbia.

Ferro echoed her remarks and that he is always trying to take himself to another level.

“For me, I just don’t have to go out growling or just screaming, ya know? I can be more melodic. There is the challenge to improve as a singer on every album. I think I improve as a singer and I still want to improve for the next one, too, but I really don’t want to dig myself into a hole. I don’t want to just do this or that all the time. And sometimes I may fail. I may think I can’t do that good, so I do just do the same thing over and over. I need to push myself out of that mode. I like to try new, different styles, and Cristina also experiments. We want to improve as musicians as well as singers and songwriters. We need to grow and to learn our true capability.”

Perhaps the strangest thing about touring in the United States is the booking and pairing of bands. In Europe, you will see a lot of the same style of bands on tour together. And it started that way for Lacuna Coil, as they have toured with bands such as their heroes Type O Negative. But the longer a band is here, the more willing booking agents are to push the envelope, which is why Lacuna Coil was opening for P.O.D.

“I think it’s more interesting because you’re playing with a band that doesn’t sound like you. Because if you play with a band that sounds exactly like you, of course fans will come for the headliner and they will say, ‘This is a clone, they’re doing the same stuff. Why should I choose them?’ But if you play something different, not all the people will love you or love your music but you will always pick up some person that says, ‘Whoa, that’s something different. That’s something I actually like.’ So it’s much better that we play with so many different bands during the years. We’ve been around since 1996 and we have played with different bands and we never encountered problems,” points out Scabbia.

But P.O.D? “On this tour with P.O.D. there is this big Christian scene following the band,” says Ferro. “We’re not a Christian band. I think really our music is of the people and our message is more about being free to choose and respect the other people, so even if we’re not….”

“…Out music is about expressing originality, so if you’re Christian or not, the point is that you have to respect other people,” chimes in Cristina.

“For example, we are going to tour with Dimmu Borgir, and we can do that, too, because we are not Satanists and we’re not Christians, either. So, those tours are two opposites but they’re still the same for us because we are not in either of those positions. So, we don’t care about those things. We mostly care about trying to convince the people to believe in what we do, to believe in us as musicians.”

And not to mention, it is a great warm-up for Ozzfest as most bands will find themselves in the situation of playing with fans of many different bands and will try to win them over. As a band, Lacuna Coil has spent much of their lives these past few years away from home, and home cooking. Not too impressed by the American version of Italian food, many times you can catch the band cooking their own meals on the bus to capture a taste of home, while in the wheat fields of middle-of-nowhere America. Life on the road was something that took a while to get used to, but now that they have spent a good part of the last two years on the road, Ferro says the band is ready for the summer-long Ozzfest tour.

“Last Summer for the first time we did the Ozzfest tour for like seven weeks and then we did some touring in Europe for a month, and then we flew back here [America] for two months and then we fly back home for another month for headlining shows, and shows for another six or seven weeks. So at that time we were maybe a little bit burned out because it was the first time we really had to tour so massively. And even when we were at home, we had to do some photo shooting and some videos and there was always something to do, so much more so than we had in the past. So, now we are more prepared. I think with this tour we know that we were going to stay here from May to September so we don’t think about going home so much now. We’re more prepared to do a longer tour.”

With that comfort on the road, can come comfort on the stage. Lacuna Coil is not so quickly, but steadily, becoming more and more known in the United States. Unlike in Europe, bands like Lacuna Coil are few and far between, and it may take the bands three or four passes through a city before fans get what the band is doing. But Lacuna Coil has the patience and the desire and, more importantly, they have the talent and honesty that comes across during every gig.

“The sound came about because everyone in the band has different backgrounds,” says Scabbia. “I mean, we are always listening on the bus or in the hotel to different kinds of music. Even if a majority of it is hard rock or heavy metal, it is still very different. We are really open minded and that’s why we try to put all the things we like in our music without saying ‘Okay, we are a goth metal band so we should play only this kind of music’ and avoiding all the other influences that we could have. We don’t really care, as long as it sounds good to us.”

And it seems to be sounding good to concert-goers as well.