Interview with Cristina at FestivalBlog 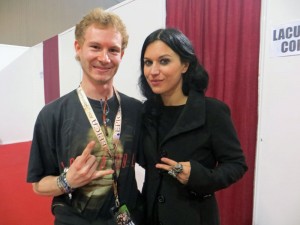 Lacuna Coil’s Cristina Scabbia was interviewed by Tim Vermoens of Festivalblog.be at the recent the recent Metal Female Voices Fest.

In the interview Cristina talked about playing at the festival, recording the new album, touring with Paradise Lost and Katatonia, participating on the new Ayreon album.  When asked about to describe the forthcoming Lacuna Coil album Cristina says:

It’s hard to describe it because it is another evolution, it is a step further from Dark Adrenaline. Probably that’s the album it’s more similar with. It’s a very cinematic album because a lot of the songs are kinda like soundtracks, a lot of like orchestral parts, a lot of strains and violins, but it’s also heavy as well. It’s hard to describe because every song has a story, as a life.

You can read the full interview at Festivalblog here.