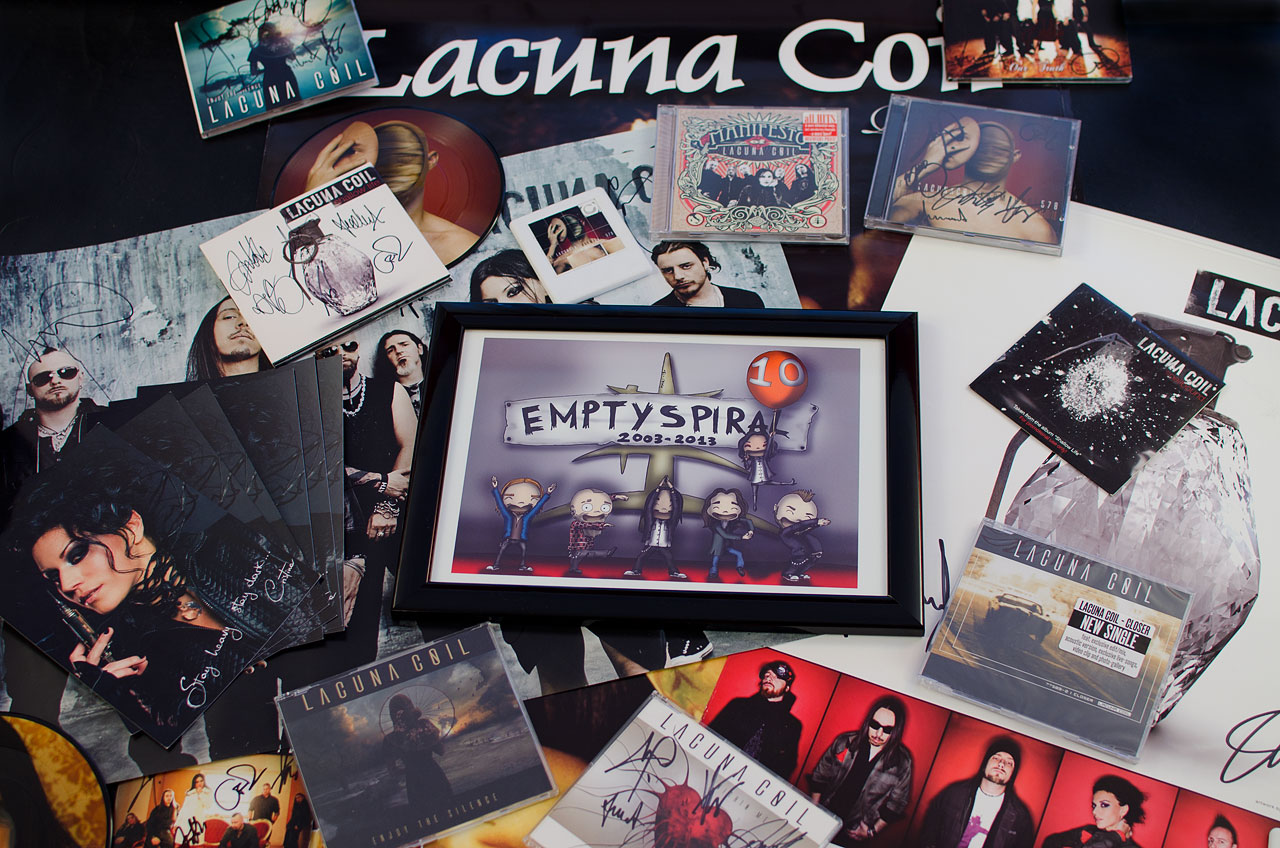 The story of Emptyspiral starts in early 2003.  After about 5 years of having given up on metal music, a friend was trying to convince me to listen to it again and he spent a lot of time lending me CDs that would invariably sit on the shelf above my computer for weeks.  My embarrassment would grow weekly as I told my friend that no I hadn’t listened to March Head, Tool, etc yet, but honestly I will at some point.

One of the CDs I had been lent was ‘Unleashed Memories’ by Lacuna Coil. Finally, one Sunday evening, after having the CD for a number of weeks I decided to give it a listen and, whilst continuing to play a game on my PC, I put it on my stereo. Half way into the first song (Heir of a Dying Day – but you knew that right?) I stopped what I was doing and literally sat in stunned silence why the whole of the album played through.  When it was over I started from the beginning repeated it. I even turned out the light in the room so that I could concentrate on the music without any distractions. I was completely hooked! Who was this band?! How many albums did they have?

I turned to the internet for guidance and found out a little about Lacuna Coil. Information was limited though; there was the official site lacunacoil.it but that actually didn’t tell me much about them (back in those days it was a LARGE sunflower, as per Comalies). There were other sites but most hadn’t been updated for years. I pretty much gave up at that point.

On Monday morning, before going to work I walked into HMV and bought every Lacuna Coil album they had (which was only Comalies!). Not having the chance to listen at work I had a real sense of excitement as I arrived home and put it in my stereo. As the first bars of ‘Swamped’ started I knew that there was no going back for me.  Within a week I had completed my Lacuna Coil collection with the purchase of the ‘Lacuna Coil’ EP, ‘In A Reverie’, and of course my own copy of ‘Unleashed Memories’.  I remained a frustrated Lacuna Coil fan though, finding out very little information around and resigned myself to just enjoying the albums.

A few months later, as summer 2003 approached, work colleagues and I started discovering the wonders of website creation. Hosting was cheap and accessible, there were literally thousands of great tools around to help you get started. I started wondering to myself; what if I created a site about Lacuna Coil? I’d never done anything like that before and, in honesty, didn’t really know where to start. First thing first of course was a name, just what was I going to call this page?  I discarded all the obvious ones and looked to the Band Biography (just as it was) on the official site. One thing stood out ‘..Ethereal was taking, so we renamed ourselves to Lacuna Coil (which means Empty Spiral)’ Perfect! On the 10th June 2003 I bought the emptyspiral.net domain, hosting, and started work on my new project. It was all pretty simple; I know I wanted a forum, a gallery, downloads, tour dates and, most importantly, regular updated news.

Creating a website is easy, anyone can do it, but keeping it updated is much more difficult as initial enthusiasm wains and other things get in the way. I was determined though.  Emptyspiral.net would be updated as often as I could and it would be the source of information for Lacuna Coil. Fifteen days after buying the domain I posted the first news item. It simply said “I’m still adding and testing the site though most functionality is available.
Adding new articles and reviews all the time. Having a few issues but things are going well. I need to do some more with the graphics though…” With that one post I opened the doors to the World. Initially a few friends joined the site and posted on the empty forum; mostly out of support for my work than any interested in the band, I suspect.

I continued to post news items; scouring the Internet for info and tour dates, and people started to join the forums.  People talked about Lacuna Coil with me. We discussed the music, the artwork, and everything else. More and more people joined and suddenly I became aware that somehow Emptyspiral had become what I was hoping it to be – the place for Lacuna Coil fans.

Late in 2003 I found out that Lacuna Coil was playing at the Astoria in London and I was determined to somehow get an interview for the site.  I had no idea how that was going to happen though, so I did the only thing I could think of and email Cristina Scabbia, the bands female singer. I didn’t expect a reply. About 5mins later I got one though. Cristina had CC’d someone at the bands record label ‘Century Media’ and asked for an interview to be arranged..

On December 27th 2003 I arrived at the prescribed time at The Astoria and waited with a number of others; all obviously professional journalists, in the small lobby. My first glimpse of Lacuna Coil was they were rushed in by their tour manager (I assumed) and disappeared inside. They didn’t see me sitting there, but I certainly noticed them.  Finally my name was called. I was going to interview Andrea Ferro. With my list of questions in hand and a mini-disc recorder I headed up to see him.  I introduced myself and was stunned when he said ‘oh yeah, I know Emptyspiral.net. I go there everyday!’ I kept my composure and completed my first Lacuna Coil interview. I didn’t get the chance to meet any of the others, but later that evening I saw Lacuna Coil perform live for the first time.  Like the first time I listened to ‘Unleashed Memories’ the memory of seeing them live will remain for me forever.

By 2004 Emptyspiral.net was becoming very busy. Lacuna Coil were touring and more and more people were joining the forum. The news from people in the US was that the band were themselves talking about Emptyspiral! About mid 2004 Lacuna Coil contacted me and asked if it would be OK with they made Emptyspiral.net the official Worldwide Fansite. What does one say in response to that?  I course agreed and suddenly there were links to my site appearing all over the place!

Lacuna Coil returned to the UK a year to the day after my first interview with them. I finally met the whole band, who actually treated me like the celebrity(!) and interviewed them for the second time.

Since then Emptyspiral.net has grown and grown.  Thousands of people have joined and hundreds of thousands of forum posts have been written.  I’ve held exclusive competitions, give ways, online chats with the band, many more interviews and much more. I’ve travelled to other countries to see them play and have met many there ‘coilers’.

Things have changed over the years. Emptyspiral has seen two previous ‘face-lifts’ to modernise what I originally constructed in 2003. However it was clear that technology was moving ahead, and the massive growth of the social networks was leaving old fashioned message boards and forums behind, much like the World Wide Web had done to the likes of Gopher and IRC all those years ago.  I created an Emptyspiral Myspace page (which was subsequently deleted by Myspace – thanks for that..) and a Facebook page, and Twitter feed.

In 2011 I decided to take on the monstrous task of redesigning Emptyspiral from the ground up.  I wanted to keep all the news articles from the over the years, and the forum of course, but a lot of the rest would have to go or change.  What you are reading now is the product of that redesign. I hope you like it.

Emptspiral has been a huge personal journey for me. It has exceeded any expectations I could have had for it.  People have met on this site, become best friends and, in some cases married.  The community has expanded beyond all belief, I have been to over 50 shows and now consider the members of Lacuna Coil to be great friends.

All of this wouldn’t now have been possible without Lacuna Coil, and it will come as no surprise that Emptyspiral has been, and forever will be, dedicated to the Italian sextet that inspired one man to start a website.

You can read about a blog entry about the last 10 years here!