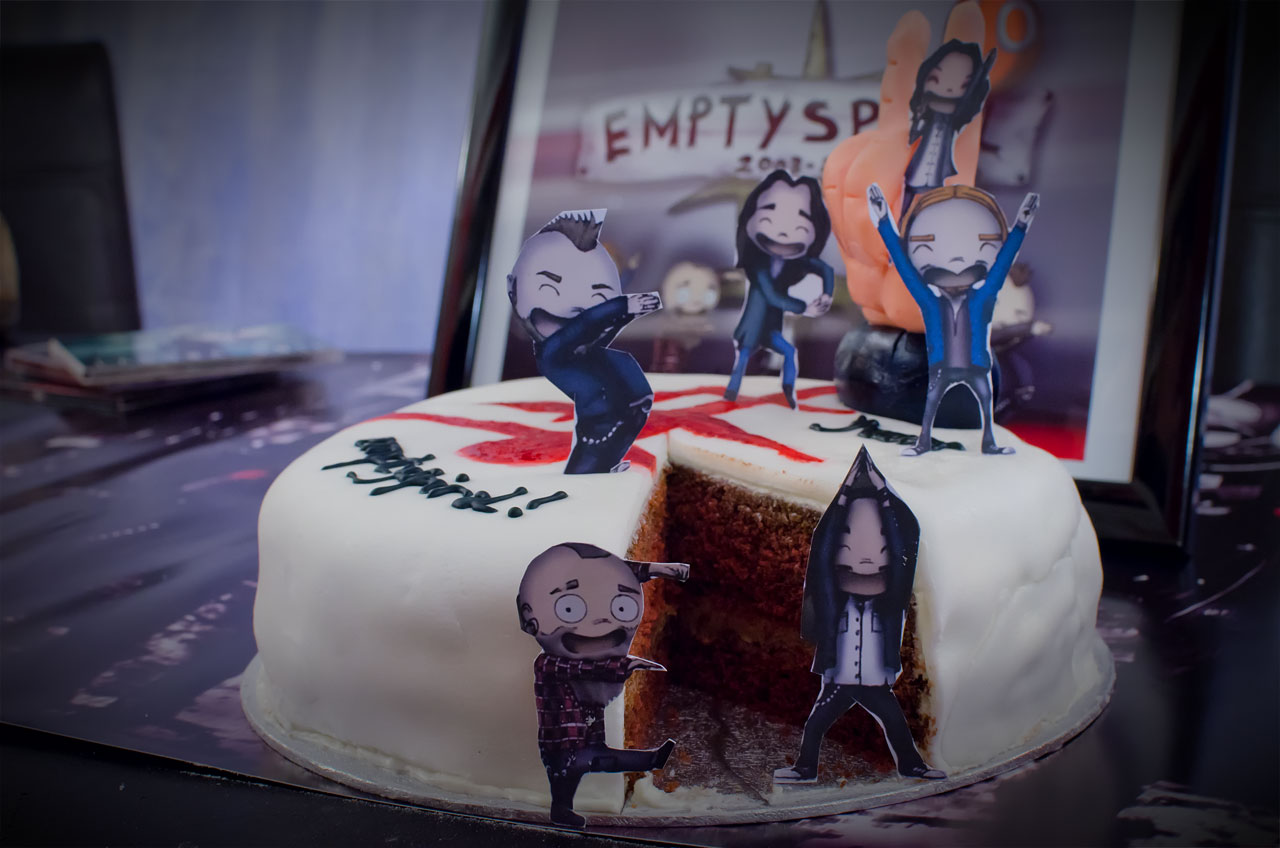 Things were very different in 2003.  Though hardly in its infancy, the Internet was a very different place then. The technology behind websites wasn’t close to what it is today; Facebook didn’t exist, and the ways in which strangers could interact were far more limited.  It was much more difficult to be an online fan of a band.

I had been introduced to Lacuna Coil when a friend lent me the album ‘Unleashed Memories’ and I was hooked from the first listen. I started looking around the Internet for information on the band and, in the most part, came up short.  There just weren’t that many places with information about Lacuna Coil, and that included the band’s own site!  What few places I found were rarely, if ever, updated…

Around the end of May 2003 I decided to create a website and spent some time deciding on a name for the domain. Even in 2003 many of the names were already owned (even though the ‘Dot com bubble’ had definitely burst) and so I finally decided on ’emptyspiral.net’, inspired by the a translation of ‘Lacuna Coil’. I didn’t buy it with the intention of starting a site dedicated to Lacuna Coil, and in fact it was nearly called fuligin.net instead. Of course if that had happened it’s very unlikely I would have ever ended up creating a community page. Anyway, as it happened, I did register emptyspiral.net and started playing with creating my own website.  I needed a purpose for the site, and the next logical step was making it a site about Lacuna Coil.

Emptyspiral was built with a very popular Web CMS package, which included a forum for discussions, and many other features.  Once it was online, which didn’t take very long at all, I started scouring the Internet and posting news, links to articles, reviews and, well anything I could find about Lacuna Coil.  The first news item was posted on 25th June 2003; a date I consider to be the formal birth of Emptyspiral.net!

I wasn’t expecting much. I had no idea that people would be interested in what I was doing. By July people started to join the forum and started to talk to me, and each other, about Lacuna Coil. It was small, intimate. The conversations were about anything really, and it felt like we all knew each other personally and were sharing a secret passion that only we really appreciated.  More people joined, and more, and suddenly it felt like Emptyspiral was proving to be special to the growing number of Lacuna Coil fans that knew about it.

That feels like a very long time ago now. There are so many painful stories I could tell, so many late (and lost) nights, so many early mornings, panicky moments (hacked!), frustration (those damn spammers!), and even death threats (“I’m going to come to your home and kill you!” – she’s not arrived yet..) but none of these compare to the fun times I’ve had, and my multiple failed attempts to understand the meaning of 1.19!

I’m taking my chance now to share few stories, and dispel one or two myths about the site…

To my knowledge at least two couples have met through the Emptyspiral community and have married! It’s hard to describe what a humbling experience this is for me, but it does give you a sense for how close the community has been over the years.

Contrary to some, I’m not employed by the band, or management, or their record label.  Emptyspiral is a fansite, created by a fan, for all fans of Lacuna Coil. We are supported by the band, management, and the label though, which is really great!

It’s not always been fun though. Over the years we’ve stepped on a few toes and have had to remove some downloads, because our hosting company in the past have forced us to – not because what we were doing was illegal. We’ve also got into trouble because we’ve published promotional images before the bands management at the time wanted us to.  This was after the images were sent to us to publish! When it comes to marketing news it’s always good to doublecheck!

I’ve been personally accused of leaking songs before release (difficult when I don’t have said songs!), and of spreading rumours about the band. Both of these I now find quite humourous, but they were horrible to hear at the time.

Still, I wouldn’t change anything really.

Thought I started the site in 2003 it wasn’t until almost a year later when the band contacted me (you can imagine my surprise!) to ask me if I would consider making Emptyspiral the Official Worldwide fan site for Lacuna Coil.  It’s not everyday that someone asks you that, and so of course I accepted. On June 5th 2004 I announced that we were the OFFICIAL WORDLWIDE FANCLUB! Being Official changed things alot for the site. The most notible for me what that I had to be more considerate of the news that I posted on the front page, as it was now considered ‘official’ news, rather than speculation that any fan site could publish.  The forums of course remained the place for news gossip though, and still do today.

Speaking of the forums, we’ve had some fun over the years. Trolls, spammers, troublemakers, we’ve had them all!  It’s been eventful to say the least, trying to herd the cats that have been the ES forums..  Sometimes I wouldn’t wish it on my worst enemy (and others, my ‘worst enemies’ felt that they needs to make the forums painful for everyone!)

When Lacuna Coil released Karmacode, I was told that the band had thanked Emptyspiral in the album sleeve, but I didn’t believe it until I saw it myself. One consideration by them, in adding the community to the list of people that they wanted to thank, was massive.  I’ll not forget the effect it had on me personally to see my name there, and it happened twice more with Shallow Life and Dark Adrenaline.  It still humbles me today.

It was on the 29th July, during Ozzfest at Randalls Island, NYC, that Lacuna Coil dedicated a song – Heavens A Lie, to Emptyspiral.  I was there to witness the event.  The sense of ‘family’ and respect from the band was huge. It wasn’t the last time the band did this.

There are many more stories, some you’ll hear on the Emptyspiral Podcast (episode 25 to be precise), some in the forums, and others for another time. The site has been placed in Best Website Polls, the community has been given exclusive access to the band, and tickets for shows, and much more.

Socially, members of the ES community have travelled across the globe to meets others, and we’ve had countless meet ups. I’ve been very lucky to get to many Lacuna Coil shows over the last 10 years as well – 76 at last count!

It’s been an amazing 10 years. I’ve seen other sites come and go, but I hope that Emptyspiral.net (you know that Lacuna = Empty and Coil = Spiral, right?) will be around as long as coilers want to come together and talk about Lacuna Coil. Facebook as changed many things.  The Emptyspiral forums are quieter now as most new fans see Facebook as the centre of their social life online.  How social networking will change in the future I can’t predict, but I hope that Emptyspiral will remain part of it.

For me at least, Emptyspiral has been a success far beyond my wildest dreams. It has brought together so many people, all with one defining thing in common – our love of Lacuna Coil.  It’s built friendships and, I hope, contributed to the success of a very talented group of musicians that I’m very lucky enough to call friends.

Here’s to another 10 years!