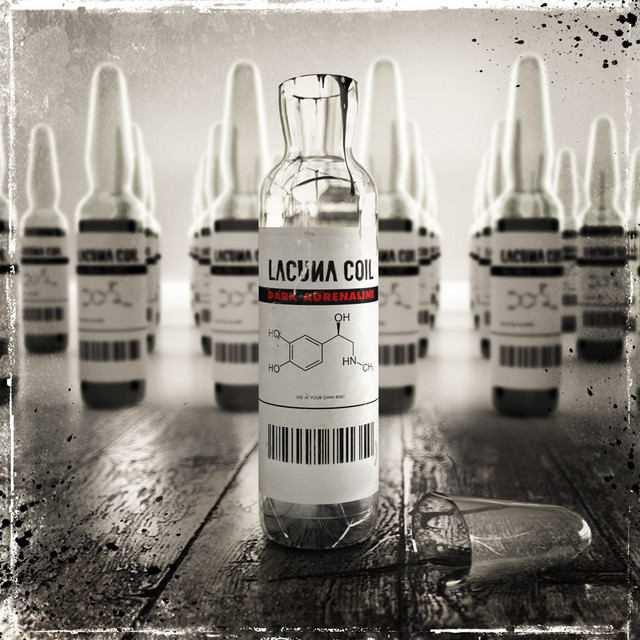 When a band as experienced and as musically diverse as Lacuna Coil release an album it’s hard to know what to expert. The diversity in their music  means that they aren’t going to please everyone with whatever they release it seems. You just have to look at how their music has evolved over the years to know that not everyone that likes ‘In A Reverie’ is going to like ‘Shallow Life’, and the reverse is also true. As a long-term fan of the band, writing an album review is always hard. I find myself comparing it to other albums and songs and start to think about how this fits with what they have done before. I enjoy all the bands albums, there is greatness in all of them, but I’ll happily admit my favourite has always been ‘Unleashed Memories’, and that is 11 years old, and so the challenge for me is recognise how the band has changed over the last decade and what that means to their music. As I sit down and listen to Dark Adrenaline, the first question I’m asking myself is how on Earth are they going to keep everyone happy? Is it even possible?

With Dark Adrenaline, they may well have succeeded. And then some!

The album is darker, with the theme of conflict running through it, and there is heaviness here that we’ve not heard since Comalies; there is lyrical poetry that we might hear on Unleashed Memorie, catchy addictive rock from Shallow Life, and strong vocal lines that Lacuna Coil really introduced in Karmacode. It all comes together to deliver an album that is Lacuna Coil in 2012, and what an unmissable treat it is. But I’m getting ahead of myself..

Dark Adrenaline opens with ‘Trip The Darkness’, also the first single from the album and it’s easy to why. It’s heavy, pounding, and relentless with a great chorus. This already feels like a departure from Shallow Life’s rock sound and the result is metal. After ‘Trip The Darkness’ finishes I must admit that I was expecting something slower; wondering if that was the heaviest we were going to get. ‘Against You’ proves me wrong, just wait until the bass kicks in, and then the solo, and then the reprise. It’s in your face and immediately feels like the band are combining music from the past with something new. The album marches on with ‘Kill The Light’ taking us back to the days of Comalies and Karmacode with its structure. ‘Give me something more’ is something completely new, though. By musical comparison it’s closest to the album ‘Shallow Life’. There are many sounds in there, and changes in styles in the introduction, that it’s clear that Lacuna Coil are exploring new things, and not allowing musical stereotyping to dictate to them how they ‘should’ sound. It has a lighter tone which is carried through into ‘Upsidedown’; a great rock track that I can easily see being released as a single.

Things slow down for the beautiful ‘End of Time’; a rock ballad and one of the best songs we’ve ever heard from Lacuna Coil. It fits so perfectly together; with a beautiful harmony between the bands two singers. No time to sleep though, as the album hits us hard with ‘I Don’t Believe In Tomorrow’. You wanted heavy and Lacuna Coil delivered, this epic track would not sound out of place alongside ‘Swamped’ and ‘Tight Rope’. And if you don’t get chills when Andrea roars after Cristina’s repeated chant of ‘I Avenge You’ then there’s something wrong with you! After that barrage ‘Intoxicated’ keeps things heavy as a rock-metal track with a dream-like theme, and Andrea and Cristina battling lyrically. ‘The Army Inside’ gives us, by comparison a relatively simple rock track, one that like many of the songs on the Shallow Life, has an addictive lyrical quality about it. Though not the albums strongest track, it’s one that I find myself humming a lot – it gets in your head for sure. As an album Dark Adrenaline straddles the line between rock and metal, sometimes moving into either for wonderful effect.

Then we have the REM cover ‘Losing My Religion’. Firstly I should say that I think it was a brave decision for Lacuna Coil to cover this, the original is so well known and well-loved (or hated). The band, much like they did with ‘Enjoy The Silence’ make it their song though. The sound is heavier, and the vocal-line is subtly changed, however it’s really the use of two vocals that change this song. As any REM fan will argue, the original was not about religion in a theological sense but more of a statement by Michael Stipe about obsessive love. With Andrea and Cristina singing alternative verses the whole message changes and becomes an argument about the breakdown between two people. It’s a simple but hugely effective change and ultimately the cover works because of it. The Lacuna Coil version doesn’t take anything away from the original, but re-interprets the message. I hope it’s understood, and released as a single as a result.

After the darkness of ‘Losing My Religion’ we have another rock track with ‘Fire’. There is a sense of hope, of determination in this song and it reminds me of ‘Closer’ from the Karmacode album. I can well imagine it being just as popular live as well.
The last song on the album is ‘My Spirit’, the song dedicated to the late Peter Steele of Type O Negative. This song is a departure from much of the rest of the album, it’s slower and would not have been out of place on the Unleashed Memories album. The song feels so very personal though and it feels like, for close to six minutes, we have a window into the soul of each band member. The end result is a heart-felt, powerful, and beautiful dedication.

On the deluxe edition Lacuna Coil have included a bonus track ‘Soul Inmate’. This song that once again straddles of line between rock and metal. The structure of the song is relatively simple, but Andrea and Cristina’s vocals are perfect once again. It’s yet another stand-out track to me and its inclusion means you should definitely try and pick up the deluxe edition if you can.

I could go on all day about this album. I’m not kidding, it really is that good. There is darkness here, but also hope. One can’t help but think that Lacuna Coil have gone through something deep, personal, and sometimes painful, as they recorded Dark Adrenaline. It’s filled with stand-out singles, a mixture of complex and simple tracks, and lots of emotion. Vocals are great, and both singers have never sounded better; they share the vocal duty perfectly. Throughout there is just so much to love, but if I had to pick on one thing though, the real star is Marco’s bass and song structure.

OK here’s the deal, Dark Adrenaline is utterly unmissable. It’s the most mature album Lacuna Coil have ever released, arguably the most complete, and has something for new fans and old. I really can’t recommend this album highly enough. On a personal level for me – this album is likely to topple Unleashed Memories from it’s throne, and that’s not something I expected to say. Ever.