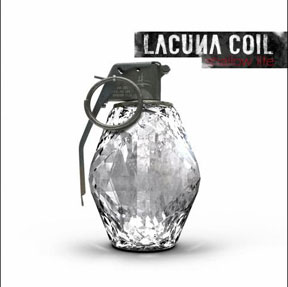 Italian music is still flourishing. Lacuna Coil come back strong on their fifth studio album, Shallow Life, using diverse styles of music as their palette. This time around the band has made their most accessible album and will be a force in the Hard Rock and Metal scene in 2009. Gone are the chugging riffs and growling from Karmacode, replaced by smoother rock oriented chords and voices. In the process the band is able to keep some of their early gothic influence in the songs. The biggest feature that has distinguished Lacuna Coil over their career has been the interplay of vocalists Cristina Scabbia and Andrea Ferro. This combination stays strong on Shallow Life and there is a fifty/fifty mix between the two singers. Andi has improved his voice on each album and again impresses with even smooth vocals, while Cristina shows off her angelic voice with full force and highlights why she is one of the premiere singers in female music. Lacuna Coil has made an album for the masses with Shallow Life and should expect crossover success on the mainstream charts. Here is a breakdown of album to see how much the band has succeeded with their new direction.

1 – I Survive – The song starts off with a vocal chant which could have come right out of The Nightmare Before Christmas. Marco then joins in with bass. This leads into a fast paced musical interlude before we get to Cristina leading the first verse of the song with her typical flair. As usual she starts off powerfully and you know that she has command of the music. Andi then joins in for a chorus of “I Survive” with a nicely blended mix of Cristina in the background. The backing music is strong ranging from fast choral interludes to straight forward rock beats during the vocals. This is a great song choice to lead off the album as it harkens back to the band’s earlier days and reminds how well Lacuna Coil can create music.

2 – I Won’t Tell You – Here is where Lacuna Coil starts to show some different direction. Andi starts off with an effects edited vocal introduction which has an alternative feel to it. From there we get more straighforward metal music as Cristina takes verse duties for a second straight song with Andi singing the chorus. This is where the band has always been strongest in using the twin attack of singers. Cristina gives a grander performance in this song and her vocals have more rock facets than in previous albums. This is another upbeat song and musically the band is tight and precise through the first few tracks.

3 – Not Enough – This is the song that really typifies the Lacuna Coil sound. It easily could have been on one of their first three albums. Musically there is a diverse selection from keyboards to Criz’s pounding drums. Cristina gets a chance to show her vocal range in the introduction. Even more so than on those previous albums Andi shines through during his first time handling verses on Shallow Life in this song. The band tries something new on this song by using both male and female vocals for the different verses. This heightens the effect of the twin vocals and gives each singer a chance to showcase their talent. Once again Lacuna Coil has a future hit on their hands with Not Enough.

4 – I’m Not Afraid – Here the two guitarists Maus and Chris get to start off the song with a nice little guitar riff. One of the heaviest songs on the album also brings the most comparisons to Karmacode. This song has Cristina handling vocals with Andi coming in at select points of the song in a way similar to how Linkin Park mixes their two vocalists. Producer Don Gilmore really brings out a comparative style between his two bands. This song really packs a punch and continues the excellent musical experience Lacuna Coil delivers with Shallow Life. To string together four very diverse yet compelling songs and have each one get better throughout the album is truly an amazing feat. The band is at the top of their game and delivering an exemplary product. Lacuna Coil is definitely not afraid to experiment.

5 – I Like It – This song shows the biggest change in direction for the band. The poppiest song on the album also has the biggest potential for mainstream success. Once again producer Don Gilmore takes Lacuna Coil in the direction of one of his other artists Avril Lavigne. Of course with Lacuna Coil you get much heavier music to go with the pop style. This song is all Cristina and she shows that she can sing radio friendly music better than those who currently are on Top 40 playlists at radio stations around the country. This song has a great rock beat and will have many people singing along to the catchy lyrics.

6 – Underdog – Another song that shows the rock direction the band is heading towards. This song has a similar feel to the Stone Temple Pilots and Andi hits his vocal notes in this one on a level equal to that band. This is the song that really gives him the chance to shine. Cristina adds in nice harmonizing to complete what is another well done song on the album. One of the highlights of Underdog is Criz on drums as he adds many flourishes throughout. Once again Lacuna Coil shows that they can play any style of metal and have it sound great.

7 – The Pain – This is a heavy and plodding song as well as the first song on the album to bring the energy level down a bit after a slew of upbeat songs. The band has always known how to make slower songs and once again delivers a fascinating melody while evoking emotions about life. Lacuna Coil uses some of their older style in this song while adding a refreshing blend of syncopated off beats. This musical direction from Marco adds to the unique variety of music on Shallow Life.

8 – Spellbound – The first single from Shallow Life is also the most upbeat song on the album. This is Lacuna Coil at it’s finest. Heavy melodic guitars with a furious beat and tinges of goth. The band has created a more modern version of their music with Spellbound. Here we have all the distinctive features ranging from Cristina’s soaring vocals to Andi’s harmonizing. The guitars are also highlighted with a nice guitar solo in the middle of the song. This song is the masterpiece from the album and will stand nicely alongside past hits such as Heaven’s A Lie. I am spellbound listening to this song.

9 – Wide Awake – The first ballad.on the album is another Cristina solo song. This song relys on piano and acoustic guitar. It also has Cristina at her best vocally. Her passion comes through with each passage in the song. Once she gets to the chorus and lets her voice go free we are treated to the soaring vocals that have defined her career. There is a calming effect that comes from the effortless way in which Cristina delivers the lyrics. Another song that should be a big hit on mainstream radio when the inevitable single comes out, Wide Awake shows that Lacuna Coil are masters when it comes to creating memorable songs. This will stand alongside Falling Again and The Ghost Woman and The Hunter as some of Cristina’s finest work.

10 – The Maze – Here the band brings back some of the Middle Eastern chants that were used throughtout Karmacode. Musically this is another rock song and could be seen as a bookend to Underdog. Andi again handles vocals with Cristina adding in harmonies. This song also has a powerful beat and catchy chorus that draws you in and pounds you with the change of pace as the chorus hits. The Maze is another great example of how a slight change in style can lead to better things and a more well developed sound.

11 – Unchained – Here the band delivers another one of Andi’s songs and again it is well produced. This song is very different from anything Lacuna Coil has put out before. Cristina has a very interesting chrous where she hangs on “U” of the word Unchained. This is the closest thing to a ballad that Andi has sung and he is up to the task and excels at his new vocal path. Cristina adds power to the song with more of those angelic vocals any fan of Lacuna Coil knows so well. Unchained also features the longest guitar solo on the entire album and it adds a nice touch to complete the song. The last minute of the song is some of the best musicianship the band has shown through the years.

12 – Shallow Life – The title track of the album is also the last song. This is another ballad and a great closing song for the album. This is something they do extremely well. Cristina again has a full song to herself and is flawless as usual. Adding in more instruments than Wide Awake gives a chance to show off Criz’s drumming once again. Also the keyboards and guitars are featured. The music has a beat similar to Cold Heritage although the vocals are more in the vein of Comalies. This combination adds a mystic feel to Shallow Life. Cristina has a way of making the lyrics flow and adding power during the chorus. There is no better way to end the album than listening to the soothing vocals that she provides during the song. A perfect end to a wonderful album.

So there you have it. Shallow Life is a glorious departure from previous Lacuna Coil albums and should be a huge hit. Whether you are a fan of metal, goth or rock there is something for everyone on the album. The band shows that they can play a diverse selection of music and still keep their roots intact. With the changes come the fact that for the first time the band doesn’t play an Italian lyric song for a studio album. Instead they rise to a groundbreaking new level in which genres are twisted and labels don’t exist. After many years of working hard at concerts for their fans, Lacuna Coil are now on the brink of breaking out and having crossover success in the mainstream. They are back and stronger than ever.

(Views & Opinions expressed in the above review are not necessarily that of ABC Inc., or The Walt Disney Company)