‘Cristina changed my way of thinking about life’ 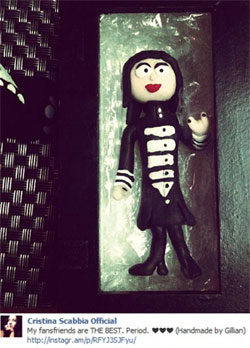 How have you discovered Lacuna Coil?

In 2011, I was mainly going to Graspop Metal Meeting, to finally see the American metalband Disturbed. They cancelled their show and Lacuna Coil was announced as replacement. On their website, I listen to the album Shallow life. I really liked it, so I went to the library to get their cd Karmacode. After their performance at Graspop, I went to the signing session. They were enormously sweet and kind to me. That is the moment were I became a fan, but it is only a year later, when I bought my ticket for Metal Female Voices fest, that my love for them started to grow more and more.

Why did it start to grow from that moment?

I was already following Cristina’s official Facebook-profile for a while. When I posted something to her wall, she ‘liked’ my post. I started following the profile more and more, I saw that she ‘liked’ a lot of posts. She even commented on some of those posts and she read all the comments people posted to her pictures,…
Then I started listening older albums and I searched for interviews on the internet. She told/tells things that touch me very hard and change my way of thinking. On a live concert, she told the following: ‘ ‘Let us realize that we should never, ever settle for less than we want, less than we deserve. And I’m sure that you have a dream in your life. So don’t ever let this dream go. Don’t let anyone tell you what you can and you cannot do.’

What makes her so special?

The combination of the music and her personality. I once made a necklace and I posted a picture of me, wearing the necklace, to her wall. She answered that both me and the necklace were beautiful. She also helped me out with personal advice. She stays down to earth, is very honest about things and is not fake. I will probably get a tattoo with a piece of lyric from the song Wide awake. I am also thinking about a logo.. but maybe that’s too binding.

How do you live towards a show?

Before Graspop 2011, I was not a very big fan yet, I just wanted to stand in front because I really liked them. For the second show, I ordered my ticket six months in advance. I made a little doll for her, bought her some presents and I made a drawing. I also made a poster with drawings from 5 people we put together. On her profile and on the profile of the singer (Andrea), I posted a comment, to let them know I was really looking forward to it all. In these six months, I thought a lot about how it would be to meet them again. I don’t know when they will be back in Belgium, but I’m already preparing new things.

Gillian: ‘She saw my necklace at the signing session and asked if I made it myself. She told me that both me and the jewel were pretty.’ 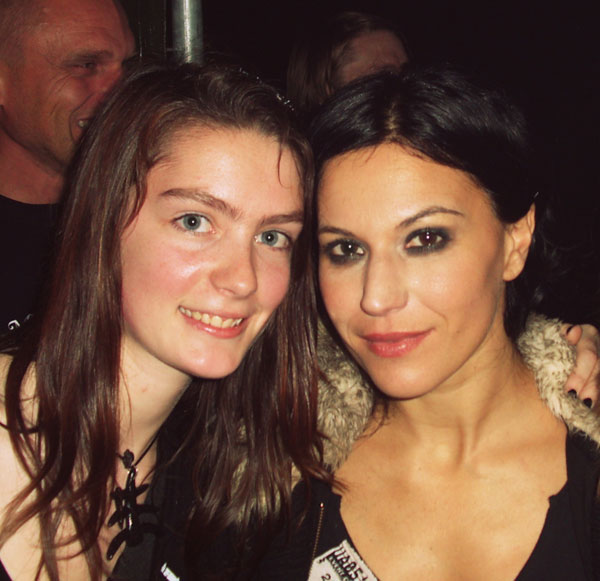 ‘After the signing session, I found a way to reach her, so I could take a picture with her’ 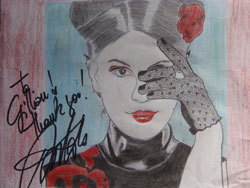 And how do you experience her show?

The performance at Metal Female Voices Fest is the best show I ever saw. They put so much emotions into their music. On a certain moment, Cristina was laying down on the stage and taking the most strange positions while singing, there were a lot of  moments when she seemed very touched. They played my favorite songs  Entwined, Kill The Light and Falling. With playing these songs, they even managed to make me cry. I made a banner for them, and Cristina reacted to it by throwing me kisses.

How did the signing session with her go?

The whole day, I have been very nervous. When I went over to them, I dropped my presents and probably, I repeated some things three times. I don’t even remember certain things I told them. But when I met Cristina, she was very sweet. She saw my necklace and asked me if I made it myself. She said she loved it. Her face was awesome when I gave her the little doll I made for her. Actually, no pictures were allowed at the signing session, but after the signing, I found a way to get to Cristina, trough security. She made it possible for us to keep a little photo-moment and she did not seem to be in a hurry. I really would not want to miss these signing sessions! When they would play in a venue (not a festival), I would go in advance, to be able to stand on the front row and after the show, I would wait for them outside, because they always take the time to see their fans. 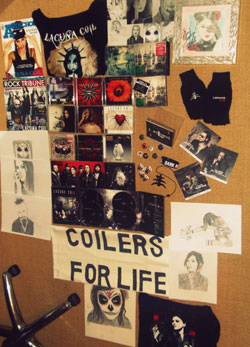 I have two Lacuna Coil T-shirts, I have all their CD’s, their DVD and some singles. I recently ordered their limited edition box of their latest album, I’m waiting for it to arrive. I also have a lot of accessories/gadgets: a set of plectrums, gloves, 2 wristbands, two signed albums, a signed card, buttons, a calendar and a few magazines with them on the cover. I also made a necklace and various drawings. There are a lot of stuff that I don’t have yet, but it’s not because you have the biggest collection, that you are the biggest fan. And it’s not because you only have one cd, that you cannot be a bigger fan than someone with an enormous collection. So I really don’t want to boast or anything.

On my facebook-account, I have a lot of Lacuna Coil friends from over the whole world. I talk often with some of them. Not a long time ago, I started a group on there, called Coiler Community, to share pictures, videos and experiences with each other. The fact that I am able to interact with so many new people from different cultures is awesome.