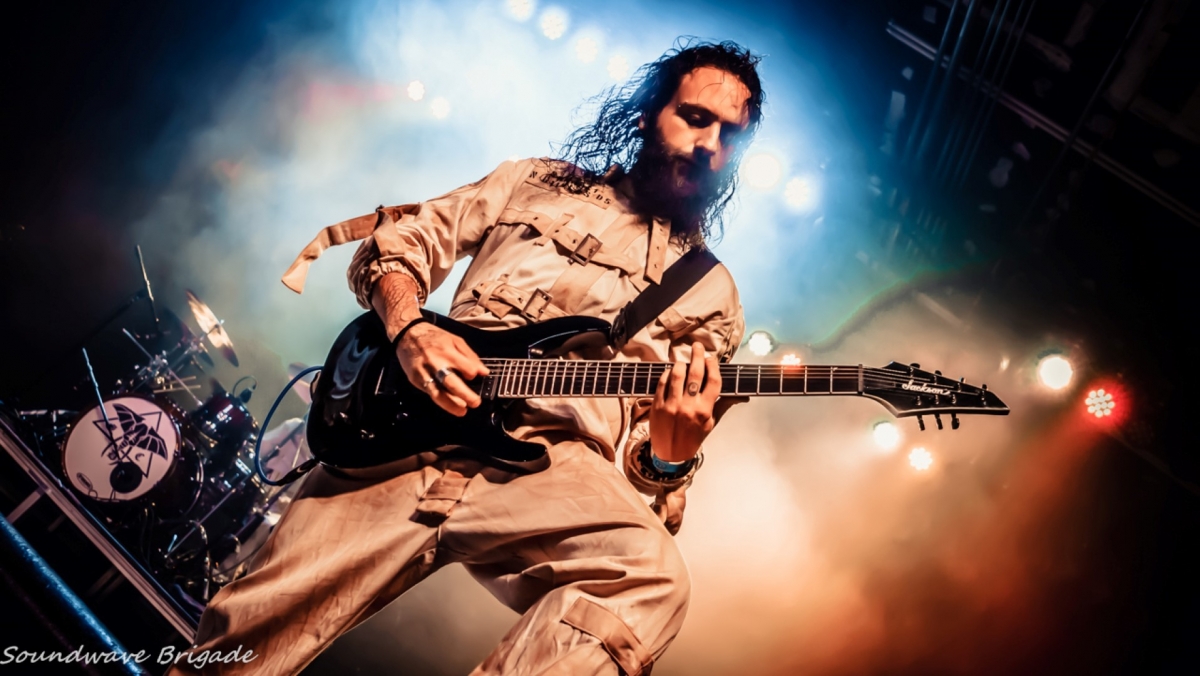 I have to admit that I was pretty bummed when I heard Maus had left the band, especially after the departure of Criz and Pizza in 2014. These members were apart of the band I have loved for 13 years now and it almost felt like they were breaking up to me. But, I have to admit, I absolutely love their new heavier sound and the new guitarist blew me away. I met him in Cherokee in May and I found that not only is he super talented, but a friendly and sweet guy as well. And he loves cats, which makes him even more awesome. At the Raleigh show on June 11th, I had the chance to sit down and chat with him a bit about the tour, his first time in the US and his dream coming true.

Kathleen: Thanks so much for letting me interview you Diego. So you’re almost done with the tour,how did it go? And this is your first time in the US?

Diego: Chow. Yes, this is my first time in the US and it’s going pretty good. I never expected something like that and it’s wonderful and I don’t want to go back home now.

Diego: It depends. From the new record, I love to play every song. But if I have to say from the set list, my favorite is Trip the Darkness.

Kathleen: Was it hard to learn how to play the guitar?

Diego: No, when I started to study the songs for the tour, I had a lot of time. I quit my job, and then I had two months to learn everything. And I was playing Marco like every day so it was really easy.

Kathleen: What’s been your favorite city so far?

Diego: Here in the US? I really love New York City, but every single country has something different. I was in California, Los Angeles and it was pretty good. I don’t have a specific favorite city, I love America. But if I had to say a favorite city, right now it would probably be New York City.

Kathleen: So how did you know the guys and gal of Lacuna Coil? Were you guys friends?

Diego: I met Maki about four years ago, he was the producer of a record of my old band. I was playing in Mellow Toy, which is an Italian band. I met him and we started to be friends and hang out. I knew Maus left the band, so I asked him for a chance and they were all eager to try with me.

Kathleen: Were you a huge fan of Lacuna Coil before joining them?

Diego: I was a fan but I never really heard a lot of stuff, but I was a fan because I heard a a single on the radio.

Kathleen: In your opinion, how is the US different from Italy? The culture, restaurants, cities?

Diego: About the food, I can say Italy is still the best. (Laughs). But in the US, I tried good burgers but that’s the food. But about the concerts, the energy in the US is something I never found in Italy.

Kathleen: I guess you sort of already answered this but what do you like about the US?

Diego: I really love the people because I never expected to find so many friendly people to me. I mean, I’m the new guy in the band, in an international band that has almost a 20 year history. I was scared about putting my face onstage in front of people who already know the band. They knew Maus first and as I’ve seen everyone, they have put their faith in me and they trusted me. And that’s got to be one of the good things right now.

Kathleen: Have you always wanted to do this? Play guitar in a famous band?

Diego: That was my dream since I was 14. The day I bought my guitar, I was 14 years old and I said “I want to do this in my life” and it’s like definitely a dream come true. I never expected all of this because I had a normal job for 16 years.

Kathleen: What did you do before?

Diego: I had lots of different jobs. I was a welder, mechanic, machine operator but I wanted to play the guitar so this is my goal for the future.

Kathleen: Who are your musical influences and role models?

Diego: I listen to a lot of different kinds of music-especially metal, rock, punk, hardcore are my favorites but I listen to classical, pop, electronic music so I try to take a little bit from every kind of music I listen to.

Kathleen: What are some things or landmarks you have seen in the US so far?

Diego: I have seen the Empire State Building but I would like to visit the Grand Canyon, Las Vegas, everything.

Kathleen: You guys also played in Asia recently, how was that different from the US?

Diego: It was weird, really weird.

Kathleen: Was that your first time over there?

Diego: Yeah. It was just really weird because it is a totally different country that I never really expected. From the food, from the crowds, from the people, from the cities, it was all really strange. The shows were awesome because the crowds had a lot of energy.

Kathleen: What upcoming shows are you looking forward to?

Diego: After this tour, we have a few shows in Europe- in Italy first, then in France, Poland, Norway. In September/October we have to start the European tour but first we have Japan, Australia.

Kathleen: Have you ever been to any of those places?

Diego: Oh, no. Never been to any of those places.

Kathleen: How are you handling all the attention from fans? Is this like a shock to you how the fans are?

Diego: I have met a lot of people and they tell me if they like the show or not. Everyone comes to me or writes to me and says “you were awesome, welcome aboard”.

Kathleen: Thanks for talking to me and hope you enjoy the rest of your tour.