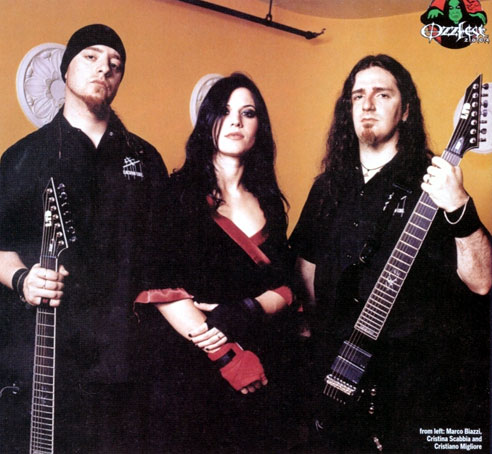 While on tour in the U.S., Italy’s Lacuna Coil have often found themselves compared to Evanescence, their incredibly popular American counterparts. It’s easy to see why. Like Evanescence, Lacuna Coil play lush, ethereal goth-metal that mixes heavy guitars with soaring melodies and mournful lyrics. And like Evanescence singer Amy Lee, frontwoman Cristina Scabbia is a raven-haired siren with a powerful set of pipes.

But Lacuna Coil guitarist Cristiano Milgiore insists he sees little in common between the two acts, and he laments that other feel compelled to make comparisons. “Fans sometimes like to fuss about who ripped off whom and all that, but it’s really not important,” he says. “If you like the music, who cares who came first?”

For those who do, Lacuna Coil take the honors. The Milan-based six-piece formed in 1996 and have since released two EPs and three studio albums on the Century Media label. Their most recent full-length, 2002’s Comalies, is also their most fully realized effort: chunky guitar riffs, swirling keyboards and the occasional electronic sample combine to create a hypnotic and atmospheric wall of sound behind the band’s calling card, the male/female vocal interplay of Scabbia and co-lead vocalist Andrea Ferro.

While Lacuna Coil have enjoyed their greatest success in Europe, they’ve gained a substantial U.S. following through support slots with Opeth, Anthrax and P.O.D., among others. As for their second-stage slot on this summer’s Ozzfest, it remains to be seen how an audience comprising fans of hyperaggressive second-stagers like Slipknot, Hatebreed and Lamb of God will react to Lacuna’s dramatic, melancholy metal.

“I think some people hear the word ‘goth’ and expect to see a bunch of sad-looking people onstage,” says Scabbia. “But our live show is really aggressive.”

Following Ozzfest, Lacuna Coil plan to stay on the road to capitalize on their growing popularity. And while nothing has been confirmed, Scabbia does have one suggestion about a possible future tour. “It would be cool to go out with Evanescence,” she says, slyly. “Why not?